We decided to travel down Highway 1 or the Coast Road. Its kinda like going down the NSW coast road. Not the same though as I have never seen the ocean quite so bluey/green. The sea was initially a grey sort of color as we made our way down the twisty windy roads. There was a fog drifting in and out over the road and sea which added to the beauty of it all. There were not many towns but the scenery around us was breathtaking. I did find it a leeetle bit stressful with the Ocean only a very few short feet away and found I was hanging on. Mr Fab ~ the Hilarious Hubby ~ decided it was the funniest thing ever to speak in a Stephen Kingy type sinister voice and discuss how we would fall to our deaths in the chilled waters below........sigh.........Bless him. 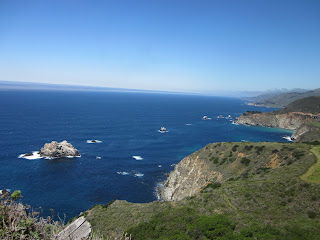 As we were driving we saw the Elephant Seal Habitat and decided to stop for a bit to watch these gorgeous creatures sunning themselves and throwing sand over their backs. It was mainly the Mums and pups who come back every year to just chill out for a bit. By this stage the winding roads were starting to take their toll on me. It was about 3 in the afternoon and I was being decidedly quiet due to the fact I was seriously in trouble of throwing up. I think it was because we had just driven since about 10 in the morning and had not felt hungry so we didn't bother stopping except to have a look at the seals. So we got to one of the smaller towns and stopped at Macdonalds to use the WIFI. I also needed coffee ~ bad!!!!! During the whole trip we have found we didn't need to buy internet and just popped into a Maccas and had a cuppa and used their WIFI for free. It enabled us to use the Ipad and find hotels or check the map as Glenda doesn't really give you an overview....just tells you when your wrong. 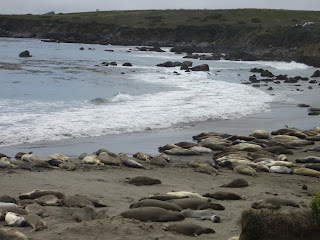 We had just sat down and I was making a supreme effort to not throw up when Mr Fab started asking me why I wasn't talking. I explained I was feeling dodgy in very short and clipped tones ....that's when I discovered my new shiny husband has zero capacity for coping when his new shiny wife is not on her game. He gets extremely stressed and he said its because I tend to do everything myself he doesn't know what to do for me. Awwwwwwww how sweet is that?????? After some hot coffee and just a little walk around OUTSIDE the bloody car I was feeling much better. We decided to stop in Santa Maria which is only a few hours from LA. Mr F is NOT looking forward to the traffic so we have got the address of the hotel and we will get Glenda the Wonder GPS to take us there. It has been amazing as I said and both of us have been very firmly bitten by the Travel Bug. We are already regrouping and planning for the next one although we both agree ~ 5 weeks is far to long. We miss Dex to much and also we are people who like routine and things just so. One of the best tips I can give Y'all when traveling is ~ put everything back exactly where it should be. We have stuck to this rule throughout the entire trip and have only had one small stress moment when I couldn't find my Kindle. ( I did find it ~ we had just put it in a different place). We will be on the way back home in two days and will lose two days with the time difference but all is good. Because of the stuff up at the beginning we do have a long and tiring 12 hour drive home but it will be worth it in the end.
Posted by Fabulous Scents Vintage at 08:10